Building Permits Up after six years – Buy apartment in Limassol

Building permits recorded a marked increase in 2015 for the first time since 2009, according
to new data.

Building permits are considered a forward-looking indicator for construction activity, which dropped sharply in the past few years, amid the collapse of the housing market.

Property valuator Polys Kourousides told StockWatch that following the stagnation observed in the constructions industry in recent years due to the crisis, most of the unsold properties are gone and there is a need for new projects.

He added that the uncertainty of recent years is ending and more people are interested in acquiring a house after delaying their plans for many years.

According to Mr. Kourousides, interest rate cuts by banks also contributed to increased interest while the reduction of deposit rates is leading investors to other forms of investments such as real estate.

The Central Bank has been reporting a deceleration in the housing price slump of the past years. A reported published by the CB on Tuesday noted that prices have probably reached a floor, though market conditions remain difficult to predict.

In 2014 the area of building permits fell to the lowest historical level but in 2015 it increased in all districts except Paphos.

In Limassol the building permits’ area reached 237 thousand square meters from 210.3 thousand last year, which corresponds to an increase of 12.7%.

In Paphos there is a reduction of 2% as the area of building permits fell to 162.8 thousand square meters from 166 thousand in 2014. 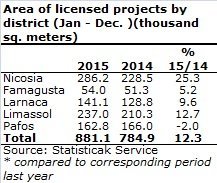 The number of building permits (including residential and other projects) reached 5.014 from 4.933 in 2014.

We use cookies on our website to give you the most relevant experience by remembering your preferences and repeat visits. By clicking “Accept All”, you consent to the use of ALL the cookies. However, you may visit "Cookie Settings" to provide a controlled consent.
Cookie SettingsAccept All
Manage consent

This website uses cookies to improve your experience while you navigate through the website. Out of these, the cookies that are categorized as necessary are stored on your browser as they are essential for the working of basic functionalities of the website. We also use third-party cookies that help us analyze and understand how you use this website. These cookies will be stored in your browser only with your consent. You also have the option to opt-out of these cookies. But opting out of some of these cookies may affect your browsing experience.
Necessary Always Enabled
Necessary cookies are absolutely essential for the website to function properly. These cookies ensure basic functionalities and security features of the website, anonymously.
Functional
Functional cookies help to perform certain functionalities like sharing the content of the website on social media platforms, collect feedbacks, and other third-party features.
Performance
Performance cookies are used to understand and analyze the key performance indexes of the website which helps in delivering a better user experience for the visitors.
Analytics
Analytical cookies are used to understand how visitors interact with the website. These cookies help provide information on metrics the number of visitors, bounce rate, traffic source, etc.
Advertisement
Advertisement cookies are used to provide visitors with relevant ads and marketing campaigns. These cookies track visitors across websites and collect information to provide customized ads.
Others
Other uncategorized cookies are those that are being analyzed and have not been classified into a category as yet.
SAVE & ACCEPT
Login or Register
Sign into your account
Create an account

Japanese giant of “MUFG in Cyprus!